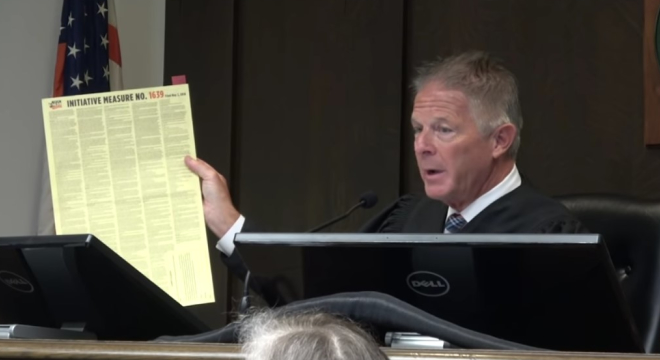 Gun owners in Washington State have been given a temporary reprieve as a Thurston County Superior Court Judge, James Dixon, threw out 300,000 names on a gun-control initiative last week.

Citing problems with the format of the petition itself, Dixon ordered the Washington Secretary of State’s office to stop certification of the ballot measure.

Gun owners would be wise to not celebrate too long, as gun control proponents have already appealed the ruling to the State Supreme Court — who are expected to rule on the case shortly.

Ballot initiatives or referendums have become the go-to tool for Michael Bloomberg and his on the ground forces in passing sweeping gun control measures at the state level.

Washington enacted Bloomberg’s Universal Background Checks in 2014, known as Initiative 594, with 59.27% of the vote.

Numerous legal challenges have been mounted against the implementation of the bill, and all were struck down, most recently in the Ninth Circuit Court of Appeals.

Clearly, gun control activists in referendum states know that they have a better chance of advancing their agenda using this process versus the legislature.

Gun rights activists, however, should not try to mimic these tactics in their efforts to pass pro-gun bills for several reasons.

For one thing, ballot referendums are extremely expensive propositions. In Nevada in 2016, Bloomberg’s machine spent nearly $10 million to secure a victory.

Gun rights organizations at the state level simply can’t match that level of financial prowess, trying to convince gun owners in an entire state to vote on a ballot question.

There is another reason to avoid the temptation to advance gun rights through the referendum process.

If a measure to expand gun rights is not passed by the electorate, the media and gun control activists will seize on it as a justification for the legislature to not advance gun rights, either.

If a pro-gun bill dies in the legislature, gun owners can target specific lawmakers for removal. Remove enough bad incumbents, and suddenly your policy objective passes into law.

You can’t do that when the majority of the state votes down a pro-gun proposal.

With gun control surging right now across the nation, gun owners need to stand up for their rights in state legislatures (and do their best in referendum states) but should forgo any notion of passing pro-gun bills via referendum.