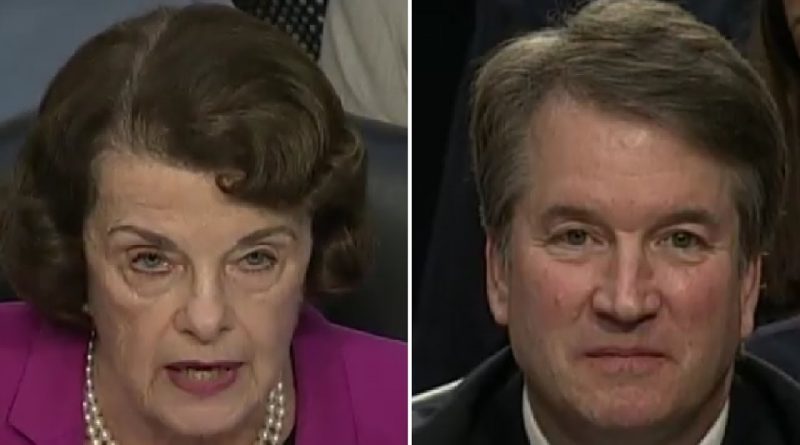 In another display of dazzling stupidity, California Senator Dianne Feinstein argued for the absurd this week during the confirmation hearings for Judge Brett Kavanaugh’s nomination to the US Supreme Court.

When given her chance to question Kavanaugh, Feinstein’s first question to him dealt with his dissent on the D.C. Circuit Court when they voted to uphold the D.C. ban on AR15’s and similar firearms.

Kavanaugh’s dissent, and his answer in the Judiciary Committee were more or less identical: the AR15 is in ‘common use’ across the country and according to the precedent laid forth in the Heller decision, they can not be banned.

Given the fact that 9.3 million of the popular AR15’s were sold during the Obama Administration alone, it’s hard to argue with the idea that these firearms are in common use.

But that did not stop Senator Feinstein, who blew past the bounds of logic when she said to Kavanaugh:

“You’re saying the numbers determine common use? Common use is an activity. It’s not common storage or possession, it’s use. So what you said is that these weapons are commonly used. They’re not.”

The fact that there are over 13 million AR15’s in circulation in the United States does not mean they are common since they are not fired every day?

For one thing, common use is certainly determined, in part, based on the number of anything that is owned by the population. Dodge pickups are in common use, simply because there are a lot of them on the road.

In addition, how much ‘use’ must there be to satisfy the Feinstein standard? Must a gun owner take his AR15 to the range once a day, once a week, once a month or some other threshold for it to be ‘common?’

And lastly, just because an item isn’t physically handled on a daily basis does not mean it is not used.

My car insurance, for example, is not something that I have to ‘use’ very often to deal with a wreck — but I ‘use’ it every day to protect myself and my family.

Similarly, firearms are ‘used’ everyday in the homes of millions of gun owners to defend themselves from criminals who would do them harm.

And on a broader scale, the millions of AR15’s and the other 300 million firearms in circulation across the country are ‘used’ every single day as a bulwark against tyranny — just like our founding fathers intended it!

Gun grabbers like Diane Feinstein may contort logic and common sense all they want, but their arguments are laughable to anyone with a 3rd grade reading level.

Frankly, she was ‘schooled’ on the Constitution, the Second Amendment, and everyday logic by Judge Kavanaugh and made to look rather senile at the end of the exchange.

To be clear, it would be a mistake for gun owners to place their gun rights in the hands of the Supreme Court in any moral sense, as the court could easily reverse the Heller decision down the road and begin to strip our gun rights away.

All free men have a right to protect themselves from anyone who wants to do them harm. Period.

Future Supreme Court decisions may overturn the Heller decision, for example, but that does not mean that it is morally wrong for Americans to own firearms.

One thing is sure, if Judge Kavanaugh is confirmed to the Supreme Court, it is highly unlikely that Heller will be overturned anytime soon.

And with Justice Ginsburg already 85 years old, radical gun grabbers like Senator Feinstein are terrified at the thought that President Trump may be able to stick yet another pro-gun justice on the Supreme Court!

Gun owners could only be so fortunate.