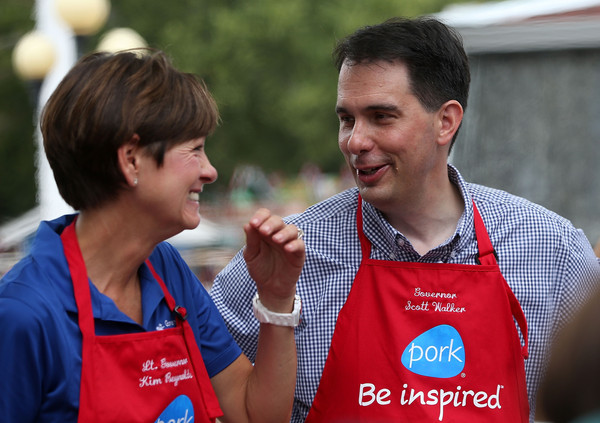 Laughed off by some Iowa politicos, it was certainly not welcome news for the Reynolds camp.

Then, just last weekend, the Iowa Poll was released that again showed Reynolds behind Hubbell, this time by two points.

And while it’s in vogue these days to ‘not trust the polls,’ the Iowa Poll called Iowa perfectly in the Presidential race in 2016 and is known for being reliably accurate.

Reynolds angered gun rights activists in Iowa by going out of her way to express her disproval with a major effort to pass Constitutional Carry legislation in Iowa, a bill that had 18 Senators already on board.

According to Iowa Gun Owners, Reynolds is now refusing to sign their candidate survey, the same survey that her predecessor willingly signed in the past. According to the organization:

We are not asking for much. We simply want Gov. Reynolds to pledge that she will stand up for gun owners. It’s that simple.

In fact, this is not a new concept here in Iowa, either.

When he came out of political retirement to run against then Governor Chet Culver, Iowa Governor Terry Branstad was happy to sign his Iowa Gun Owners candidate survey!

In a very similar way, Wisconsin Governor Scott Walker is also in very serious trouble with just over two months before election day.

Four polls in a row now show Walker losing to Tony Evers by over 4 points.

This Marquette University poll, from ten days ago, shows Walker losing by an even 5 points, the same result that this PPP poll showed from a month earlier. Real Clear Politics has a weighted average right now of +4.7%, in favor of Evers.

Walker, similar to Reynolds, angered gun rights supporters last year while Constitutional Carry was on the move in Madison by saying that he ‘is comfortable’ with the current gun laws in Wisconsin.

‘Being comfortable’ with the laws as they are, is blatant political speak for ‘kill the bill,’ and gun rights supporters watched in anger as legislative leaders did exactly that to Senate Bill 169 — which had over 40 cosponsors between both chambers.

Gun rights supporters in Wisconsin were already frustrated with Walker, as Wisconsin has trailed almost every other state in the nation in passing ‘Shall Issue’ and only repealed their 3-day waiting period on handgun sales when Walker decided to run for President in 2015.

While both Reynolds and Walker are beginning to run tepid ads about how they are pro-gun, gun owners are rapidly getting fed up with these tired talking points.

After all, in addition to Governors’ Reynolds and Walker betraying gun owners in the last two years, gun owners have watched as ‘pro-gun’ Oklahoma Governor Mary Fallin vetoed Constitutional Carry earlier this year.

In South Dakota, ‘pro-gun’ Governor Daugaard vetoed Constitutional Carry and went on to ensure that the override vote failed by a handful of votes.

And in Florida, gun owners watched as ‘pro-gun’ Governor Rick Scott passed a huge gun control measure into law this year, in response to the Parkland, FL shooting.

So the idea that gun owners are supposed to fall in line and back legislative or gubernatorial candidates because of their party affiliation — when they are taking active steps to betray gun owners — is simple laughable.

It remains to be seen whether Iowa Governor Reynolds and Wisconsin Governor Walker can survive their reelection efforts while spiting gun owners.

But one thing is becoming more and more clear: would-be lawmakers who contemptuously scorn grassroots gun owners, trusting that out-of-state endorsements from national gun groups can save them, had better watch out!