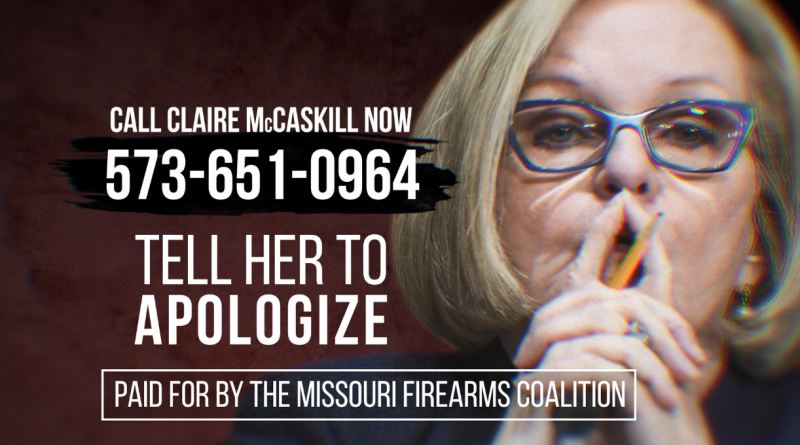 Continuing a growing trend where state level gun rights organizations are leading the charge in exposing gun-grabbers at the state and federal level, the Missouri Firearms Coalition (MOFC) just released their first ad of the 2018 cycle against Claire McCaskill.

You can see the ad here.

Alexandra Salsman, Political Director with the Missouri Firearms Coalition, says that the ad will run on social media, radio, and TV if the organization can fund them.

“Claire talks like a gun owner when she’s home in Missouri,” Salsman said, “but its clear from her record that when she’s in DC, she votes how the Bloomberg/Soros/Obama crowd tell her to vote. We are going to make sure that gun owners here in Missouri know the truth!”

The ad highlights a growing trend where state level gun rights organizations are taking the lead over national
groups in punishing anti-gun politicians for their votes.

In Georgia, Georgia Gun Owners are unleashing multiple ads like this against would-be governor Staci Abrams in a campaign where hundreds of thousands of gun owners are being reached, according to the organization.

In Iowa, Iowa Gun Owners went after 34-year Senate Majority Leader Mike Gronstal with this TV ad during the 2016 election cycle. The ad also ran on radio and Facebook. According to the group’s Facebook page, the ad was seen by over 60,000 people in that medium alone.

Gronstal was defeated by gun owners in that race, largely over blocking a vote on Stand-Your-Ground and Constitutional Carry legislation.

In Minnesota, Minnesota Gun Rights rolled out this TV ad during the 2014 election cycle blasting Senator Rod Skoe for voting against Constitutional Carry and for supporting Bloomberg’s universal background checks.

The growing quantity of in-state gun rights organizations that report only to local members, and often hit harder than more cautious national groups, has proven to be a good thing for the gun rights movement as more and more states are passing pro-gun bills at their behest.

At the same time, these groups, who always have more facts than the NRA, are running more and more election ads like you saw above — with powerful effect.

While it’s too soon to know if Claire McCaskill will stave off the Missouri Firearms Coalition’s attack, she had better hope she has better luck than the politicians listed above!